What is the anterior cruciate ligament?

About half of the injuries occur in combination with injuries to the menisci, cartilage or other ligaments. In addition to providing stability to the knee, the ACL protects the meniscus and the cartilage. Therefore, it is common for ACL injuries that are left untreated to lead to injury of these structures. In turn, this will lead to the accelerated and early development of osteoarthritis.

Anterior cruciate ligament surgery requires a thorough knowledge of the anatomy of its insertions as well as of the other ligaments and structures of the knee. 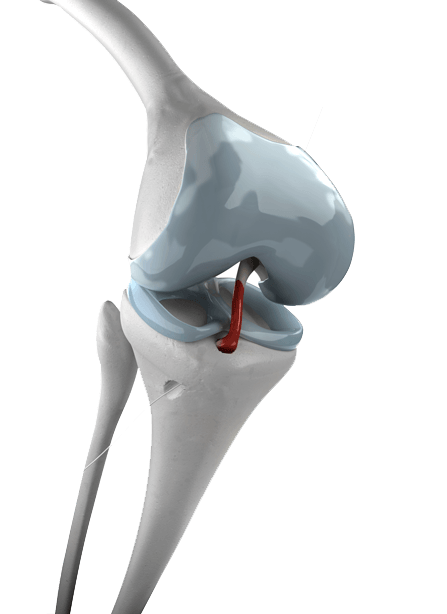 During his career as an anatomist and further development as a surgeon, Dr. Gelber has gained extensive knowledge in this field. It gives him a unique expertise when assessing injuries and reconstructing them as closely as possible to their prior natural state. The precise location of the tunnels is the most important aspect of ACL surgery. It is so much so that placement only millimeters off their optimum position is the main cause of ACL reconstruction failure.

In this context, ACL surgery has evolved dramatically in recent years. Not long ago and even in many places still today, the ligament is reconstructed with a central upright graft. This has led to continued rotational instability, which is most disabling and harmful to the patient. It has been shown that the best way to reconstruct the ligament is by reproducing its previous anatomy as this best restores its proper function in comparison to these previous techniques. Dr. Gelber, as part of the Equilae team has been a pioneer in Spain in the introduction of this technique and its variants of selective or partial ligament reconstruction. There are multiple scientific studies that Dr. Gelber has contributed to in this field of surgery.

Although the ligament is functionally divided into two bundles, it has been demonstrated that it is not necessary to individually reconstruct each one in the complete tear. Different is the situation of partial ACL tears in which only one of the bundles is damaged. In these cases, treatment requires precision and experience as it is vitally important that the healthy bundle remains intact without injury during surgery while the damaged bundle is being reconstructed.

Upon the need for surgical treatment, the patient is instructed as to care prior to surgery with simple guidelines.

In the operating room, different types of grafts for ligament reconstruction are used, in most cases being obtained from the patient. An alternative is to use the hamstrings tendons, here extraction through a small incision of 2cm on the inside of the knee is possible.

This results in less postoperative pain and better cosmetic results. Another tendon frequently used by Dr. Gelber is the quadriceps tendon. This alternative is usually indicated in patients with greater functional demand and who practice more demanding sports activities such as contact sports or sports calling for turns on the knee.

Another option is the patellar tendon. It is an alternative that is not currently used as first choice for the possible consequence of pain in squat positions. Finally, tendons from tissue banks are a valid alternative but they are left as an alternative for multiple ligament injuries or in patients with very low functional demand because of their higher tear rate. In short, each has its advantages and disadvantages with the most appropriate for use being chosen on a case-by-case basis.

The day after surgery and before leaving for home, the patient receives all the necessary information relative to postoperative care. The patient also leaves the hospital with an appointment for within 10 days or so to have the wound checked and have the stitches removed.

The rehabilitation process is considered key to the reconstruction of the anterior cruciate ligament. It is imperative that the patient well understands the process to recover 100% of knee function. One of the most common complications after surgery of the anterior cruciate ligament is the loss of mobility, especially extension. This leads to limping, quadriceps muscle weakness and pain in the knee region. Many studies have shown that the worst time to perform the ACL surgery is when it is done with a swollen, painful and stiff knee. Therefore, this risk is minimized if surgery is delayed until the period of acute inflammation has passed, the inflammation has subsided a lot, complete or almost complete mobility is recovered and one can walk in an almost normal manner.

The approximate rehabilitation phases are:

PHASE Ib (2-4 weeks) aims to eliminate the effusion, to achieve full extension and restore muscle control of the leg.

PHASE II (From week 5 until the objectives of the phase are achieved): aims to normalize walking, have mobility without pain and be able to stand on the operated leg

PHASE III (From Phase II goals achievement until weeks 12-16): the objective is to have control without pain with light and low impact exercise.

PHASE IV (from Phase III objectives achievement until week 24-40): the aim is to have good neuromuscular control in specific low impact sports exercises

Although there is the feeling that the knee is in optimal form many weeks before reaching this stage, the reconstructed ligament goes through a period of remodeling that even needs up to 2 years to complete. In any case, with the exception of cases of athletes who require an early return to their sports activity, it is advisable to avoid contact and pivoting activity until 8-10 months after surgery in cases where the sport is more casual type of.

With such a high frequency of ACL surgeries around the world, it is no wonder that more and more cases of knee instability occur in people previously operated on for this ligament. Unfortunately, it is recognized that the main cause of these failures is due to technical errors at the time of surgery. This greatly affects the type of surgery needed to reconstruct the anterior cruciate ligament again. There are multiple variants to be considered in each case and therefore the treatment to be performed should personalized. View a video of some of these situations.